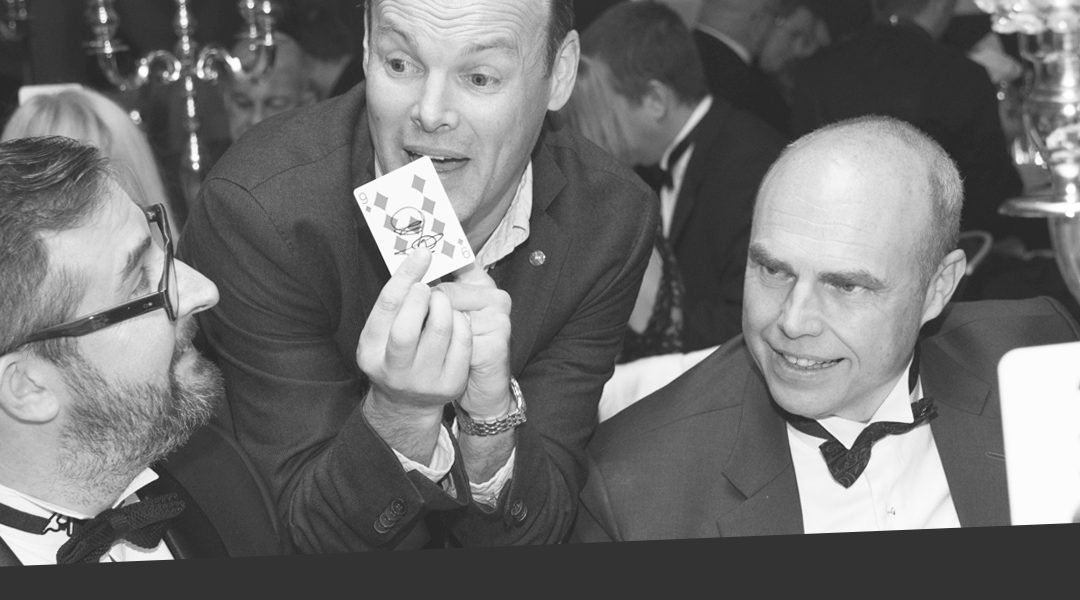 I’ve [Peter Kidd] reported on the Magic Nights at The Mill at Sonning in Berkshire before, and I make no apologies for doing so again because it really is a great night’s entertainment.  Not only that, I had my ill-informed opinion of one performer transformed by a superb performance of old-school magic.  But more of that later.

As usual, the show was hosted by Dan Hudson, and as usual, he did a fantastic job of keeping the show flowing.  And – dare I use ‘as usual’ again? – he had gathered together a stellar trio of performers.  First on was Neil Henry, who I’d missed on Britain’s Got Talent (because I don’t watch Britain’s Got Talent!) Neil’s stage persona was, to, my eye, Mr Normal.  He didn’t dress like a performer; he didn’t project any ego whatsoever.  In fact, he appeared to be as amazed as the audience at what was happening in his hands. Two of his routines stood out for me. One was his take on Needles or Razor Blades from Mouth using a tin of alphabet spaghetti in tomato sauce – seriously – the ‘freely’ chosen word attached, letter by letter, to the thread he swallowed. The other was a very clever prediction of lottery numbers using a board covered with trademarks. Very clever and a mentalism effect that involved the WHOLE audience rather than just a chosen few. A good opening to the evening.

Second on the bill was Maximilian Somerset III –to you and me, Max Somerset of TV fame. Again, I’d not seen Max on any of his TV appearances, so I had no idea what to expect.  OMG! What a personality.  He did a wonderful prediction effect using a large die and an electronic organ.  No, I’m not kidding. A spectator shook the die and Max then played a tune with the number on the die in the title. The routine was great, Max’s work on the keyboards was great too, his voice isn’t bad either, and he even had to contend with an idiot spectator who chose to miscall the number on the die.

His second effect is a bit of a blur, but a woman thought of a country and then Max sang a song with lyrics that named (seemingly) every country except the one in the woman’s mind. But Max’s talent really came through in his Just Chance routine using a borrowed watch and a lump hammer! Sadly, again, the spectator thought the show was all about him and not the performer, and I wouldn’t be surprised if that added some extra weight to Max’s arm as he smashed every watch except the spectator’s.  A lesson in theatre, stagecraft and audience management.

Top of the bill was Jamie Raven. Now, as I’ve said, I don’t watch BGT.

Well, I was astonished.  He was charming. It was gently humorous. It was self-effacing.  It was a wonderful act as one might have seen in days gone by, before the demands of TV, talent shows and the need for immediacy and impact.  It was a lovely, lovely act, and I would happily travel a long way to see it again.

And holding the evening together was Dan Hudson. Not in the slightest over-awed by the big TV names around him, Dan kept the show moving with an assured touch, witty interaction with the audience and some baffling magic of his own.  As Dan books, the acts himself, the content of the shows are down to him and him alone, and I don’t really see how he can top this evening’s bill … but I said that after his previous show, too.  All I can say is that I can’t wait for his next – now twice-a-year – Night of Magic at The Mill at Sonning.

Combining the art of magic with flair and style, Dan Hudson has a unique ability to capture the senses of an audience. An accomplished member of the prestigious Magic Circle, Dan displays tremendous skill in executing traditional magic tricks in a compelling and contemporary manner.

Contact Dan Hudson via phone 07966 036 928, email enquiries@danhudsonmagician.co.uk or using the online contact form for an obligation free quote and let Dan Hudson Magician make the magic happen for you!